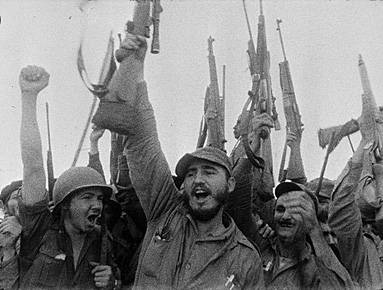 Cuba in Revolution: Escape From a Lost Paradise by Miguel A. Faria, Jr., MD

Thirty-six years ago after a harrowing ordeal at sea, Miguel A. Faria, Jr., escaped from Cuba with his father and found a new home in the United States. Cuba’s loss was America’s gain. A consummate historian, Dr. Faria here applies himself with gusto, using a treasure-trove of inside information to tell his personal odyssey and to reveal the true story of the Cuban Revolution and its sell-out to communism. Especially noteworthy are the unknown stories of the Cuban patriots who fought Castro’s communist regime.

In Cuba in Revolution: Escape From a Lost Paradise, Faria exposes the culpability of the U.S. State Department not only in support of the revolution but also later in the Bay of Pigs disaster and reveals the fawning over Castro by America’s liberal elite on his 1995 and 2000 visits, even though Cuba is listed by the U.S. State Department as a sponsor of international terrorism. Castro’s on-going diatribe against America and capitalism, Cuba’s support for an anti-Western alliance, its involvement in international drug smuggling, its support of international terrorist organizations, and its potential for bioterrorism — all are documented. Faria also reveals the inside story of the Elián González case where the U.S. government, the news media, and our liberal elite strangely ignored the abuse of this child’s rights. A proposed course for Cuba after Castro is offered which includes establishing a Constitutional Republic based on natural rights theory. Finally, documentation in the appendix provides a shocking indictment of Castro’s regime.

Ninety miles from our southern border, one of the world’s wealthiest men (worth $1.4 billion according to Forbes magazine) lives like a king. Fidel Castro, in his 42nd year, is the longest-ruling Marxist dictator in history. Today in his island “workers’ paradise,” his subjects, the Cuban people, live in abject poverty, facing chronic shortages of even the most basic commodities such as food, medicine, clothing and housing. In spite of massive Soviet aid (16.5 million dollars per day in 1988), Cuba went bankrupt in 1986, defaulting on its debt. Its economy only worsened after the fall of the Soviet Union. By 1997-98, the sugar harvest was the worst in over 50 years, and the basic necessities of life had to be rationed.

Cuba is an island prison without an exit, a brutal repressive police state where individual rights are non-existent. Its prisons have increased from 11 under Batista to over 300 now. More than 20,000 Cubans have been murdered and more than 500,000 jailed. More than one-sixth of the population, two million people, have fled the island, with three-fourths of those leaving by sea perishing (36,000 died fleeing between 1960 and 1993 alone). Child abuse, political incarcerations, torture and murder are rampant. Psychiatric rehabilitation is the same as torture. The Cuban version of Big Brother, the thought police (or DGI), commits unspeakable torture both in the Havana Psychiatric Hospital and in Cuba’s prisons.

Before the revolution, the Cuban health care system was one of the best in the Western Hemisphere, but since the 1990s, it has been in shambles. An acute epidemic of blindness occurred in the early 1990s. Instead of being caused by the U.S. (as claimed by Castro), it was due to classic beriberi caused by the severe food shortages and rationing which had resulted from the communist policies of central planning. Today, Cuban physicians lack the medicines and medical equipment needed for the proper care of the sick. Cubans suffer from high child and maternal mortality rates (the latter being four times that of the U.S.), while Cuba’s homicide rate is higher than ours and its suicide rate is triple ours, being one of the highest in the world. In addition, Castro’s health care apartheid has two classes of patients, the mayimbe or el pincho class (the privileged communist elite) and the liborio, or working class, each receiving a different quality of health care.

As in all socialist systems, Castro uses envy, class hatred, and class warfare. His collectivization of the workers and peasant farmers compares in destructiveness and tragic results to that of Stalin’s war against the kulaks. As Faria notes, “terror is still the order of the day for Cubans who oppose Castro.”

With his usual astute political insight, Faria draws a parallel between what happened suddenly in Cuba and what is evolving slowly today in America. As he notes, “…all Americans…are being driven inexorably and unwittingly down a socialistic, collectivist…path…” For example, most of our current problems with public education are due to the subjective philosophy of Fabian socialist John Dewey, which spawned situational ethics and moral relativism. This has led to outcomes-based education, values clarification, and “Goals 2000” (“School-to-Work”).

State schooling destroys the independence of students and teaches them pragmatism, that might is right, and that the ends justify the means. Today, American children are not even aware of the legacy left by our Founding Fathers and do not understand their responsibilities as citizens.

Attempts to introduce a national I.D. card and proposals for gun control and for national service have ominous implications. As Faria points out, national I.D. cards, a surveillance network, and civilian disarmament are hallmarks of the modern police state, having occurred in Stalin’s Russia, Nazi Germany, Red China, and North Korea.

Most Americans are woefully unaware of the hell that exists so near to us. This is because of the distortions of the news media and the dishonesty of American liberals. The revolution originally was supported by the American news media, especially The New York Times reporter Herbert L. Matthews. Even today such well-known reporters as Dianne Sawyer, Peter Jennings, Dan Rather, and Barbara Walters fawn over Castro and, by extensively distorting and twisting the news reports, hide the truth from American citizens.

This book offers important lessons for all Americans. For many years we have known that socialism can’t work. Thanks to Dr. Faria’s herculean effort, hopefully we can learn from Cuba in Revolution to prevent America’s gradual, inexorable slide toward socialism and prevent what happened in Cuba, where an island paradise has been utterly destroyed.

Dr. Jerome C. Arnett, Jr., is a member of the Editorial Board of the Medical Sentinel, a medical ethicist, and a practicing pulmonologist in Elkins, West Virginia.